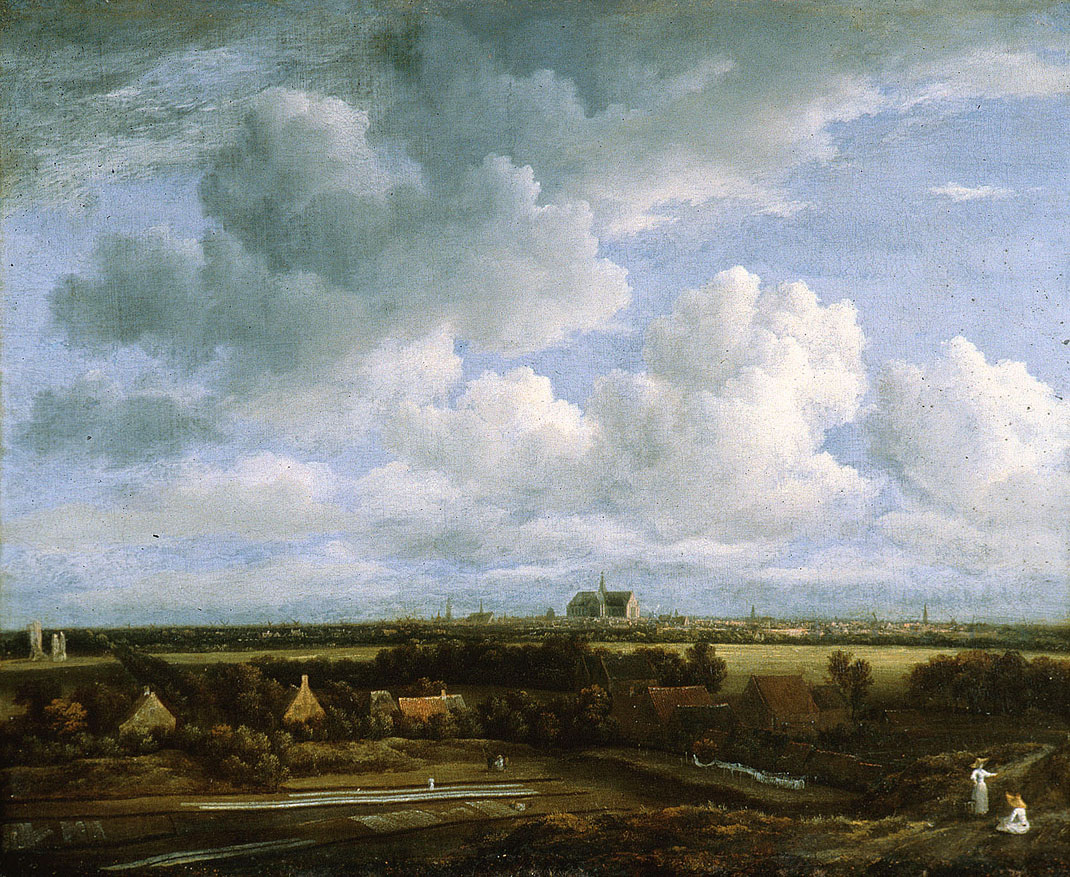 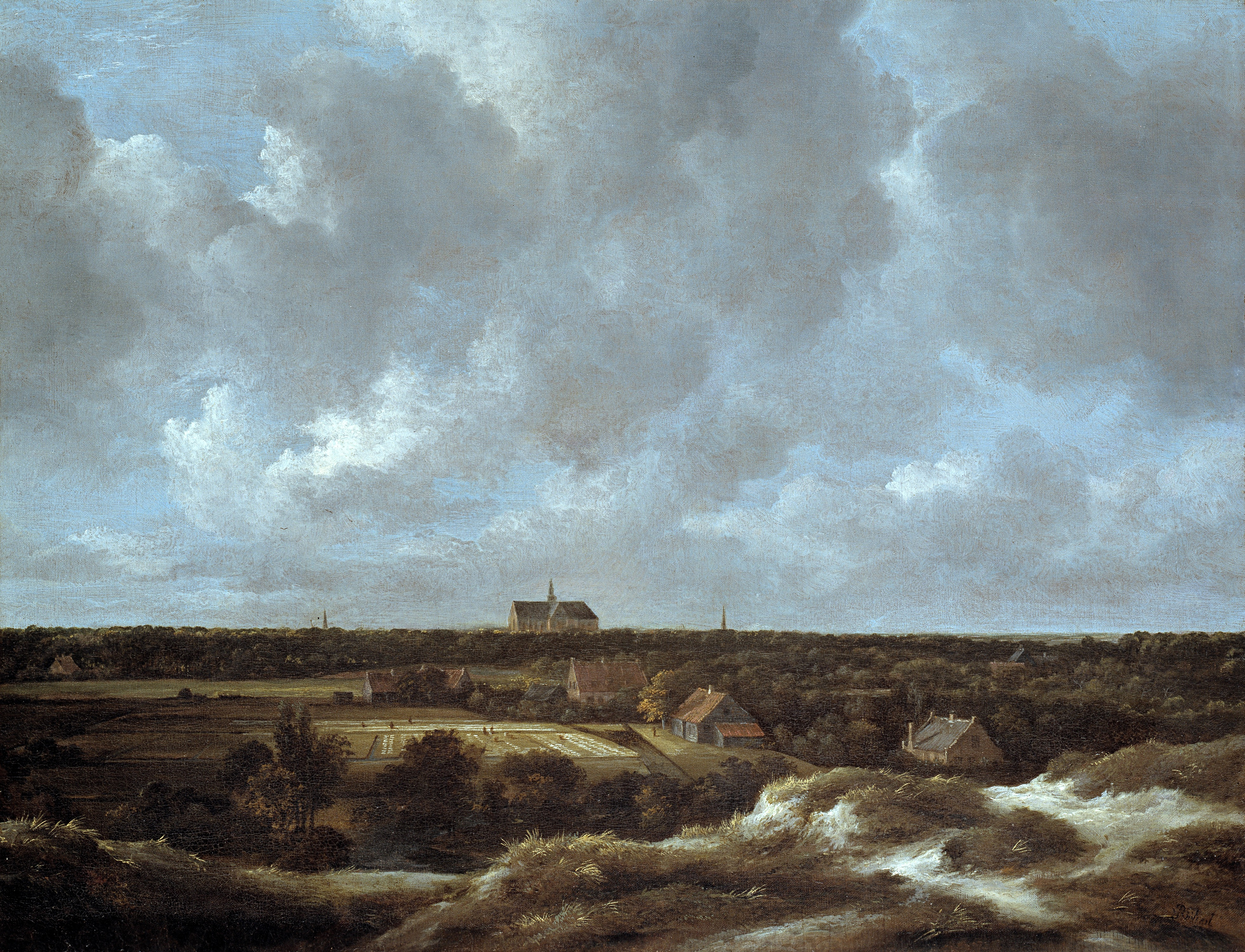 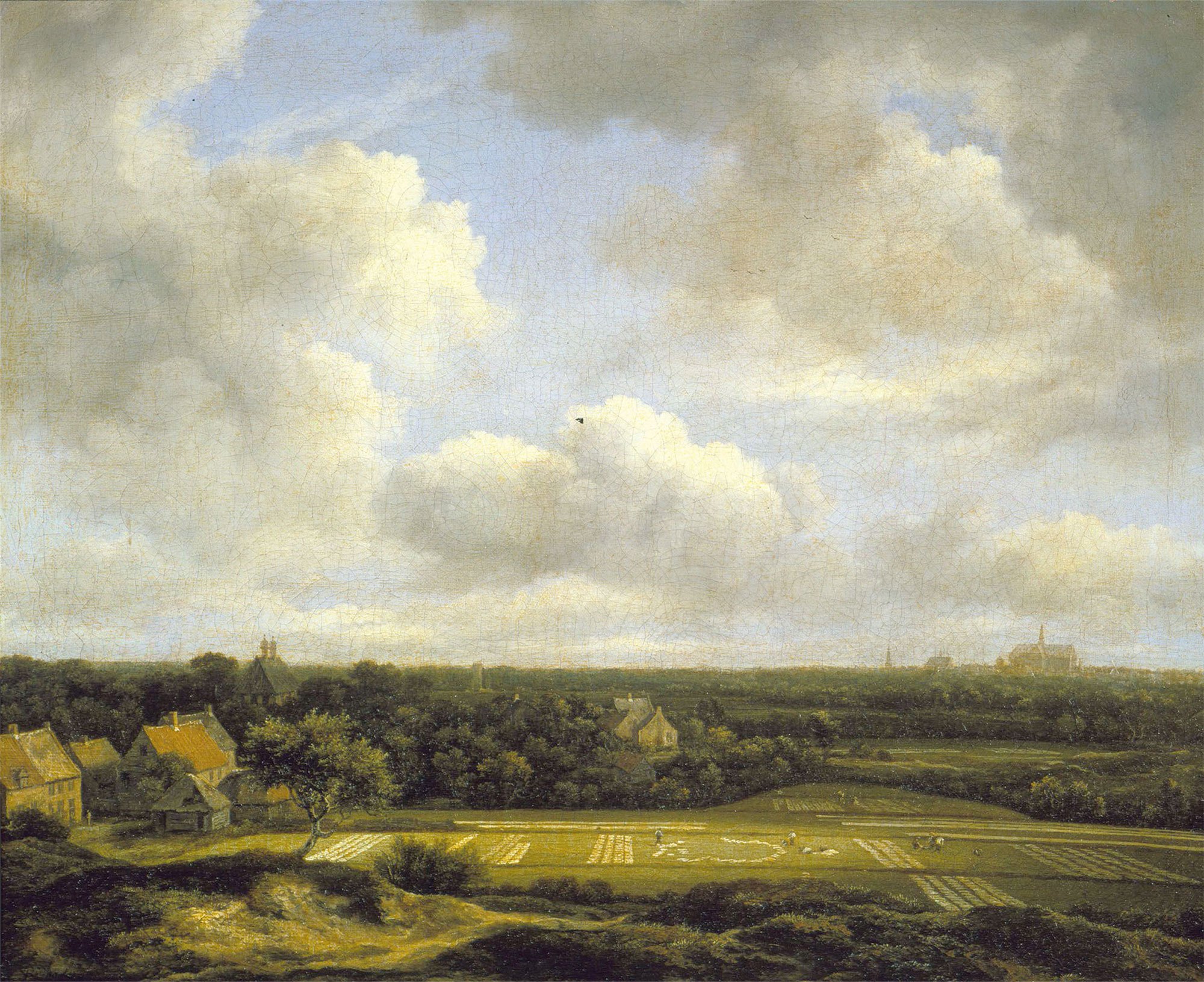 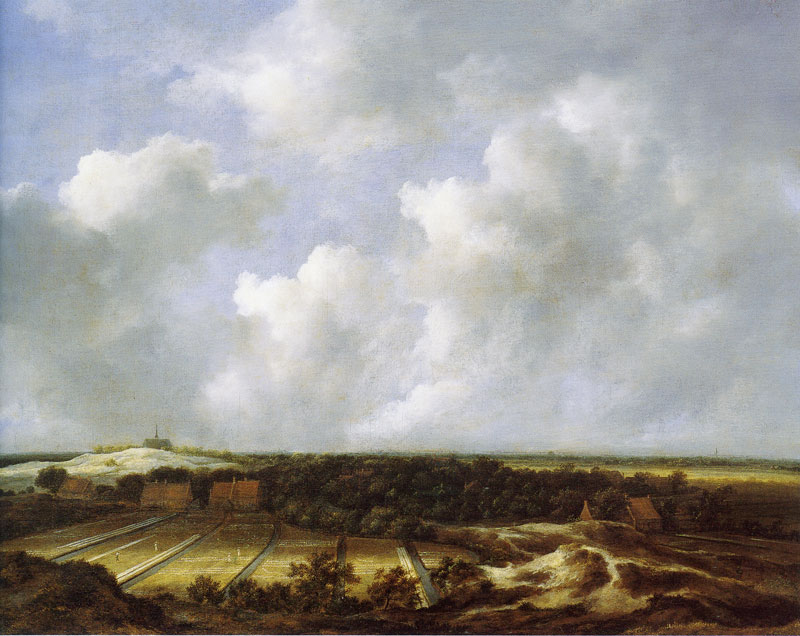 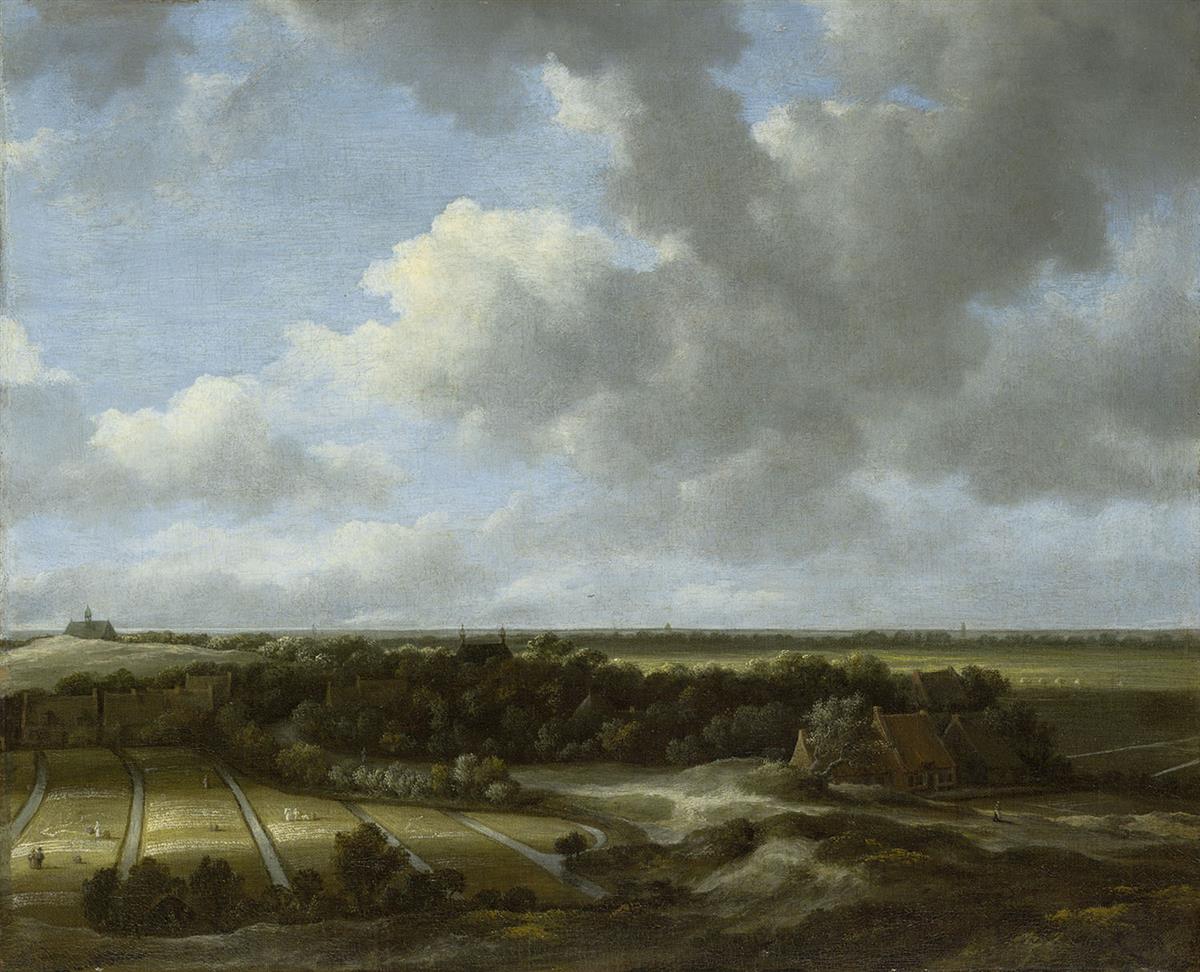 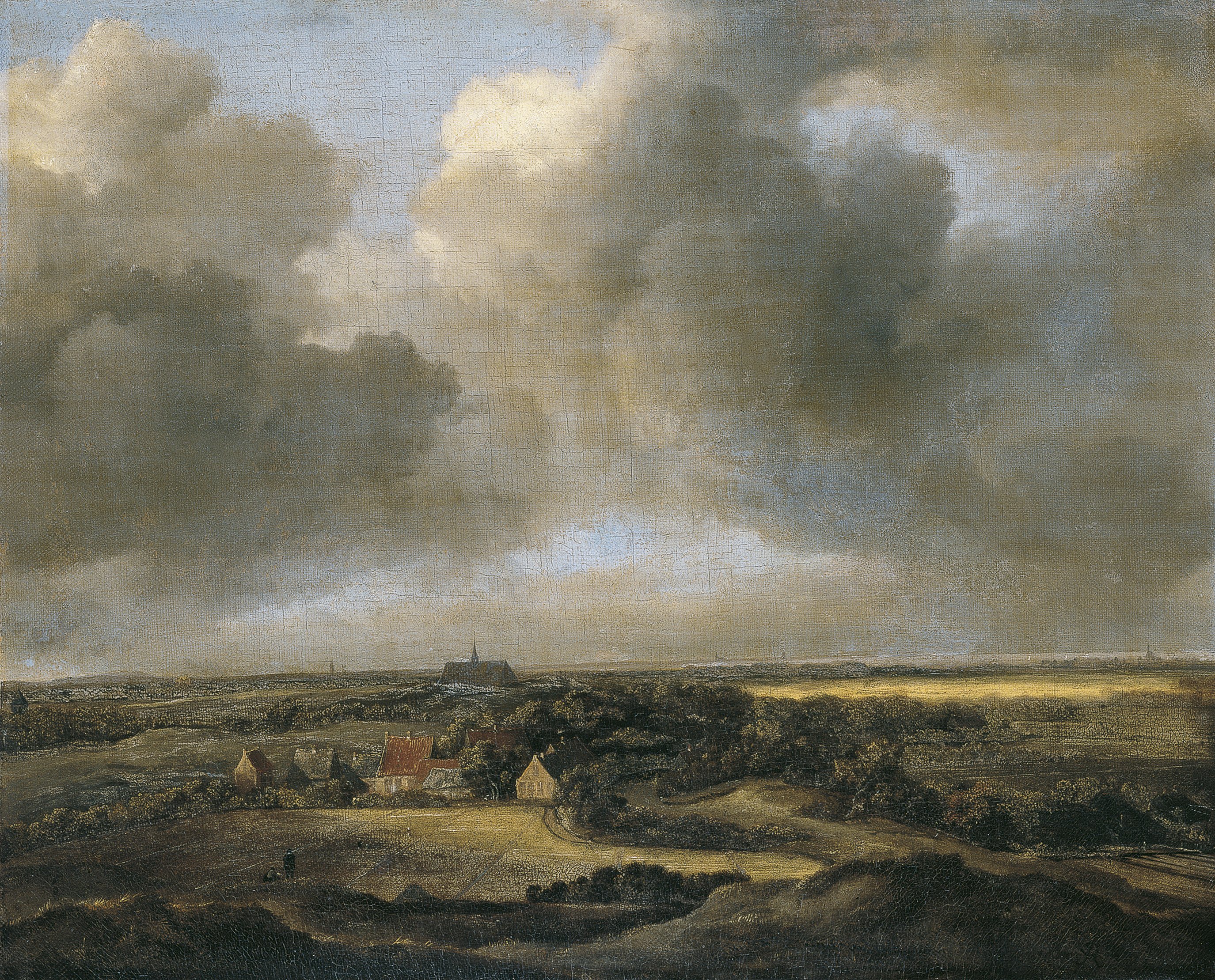 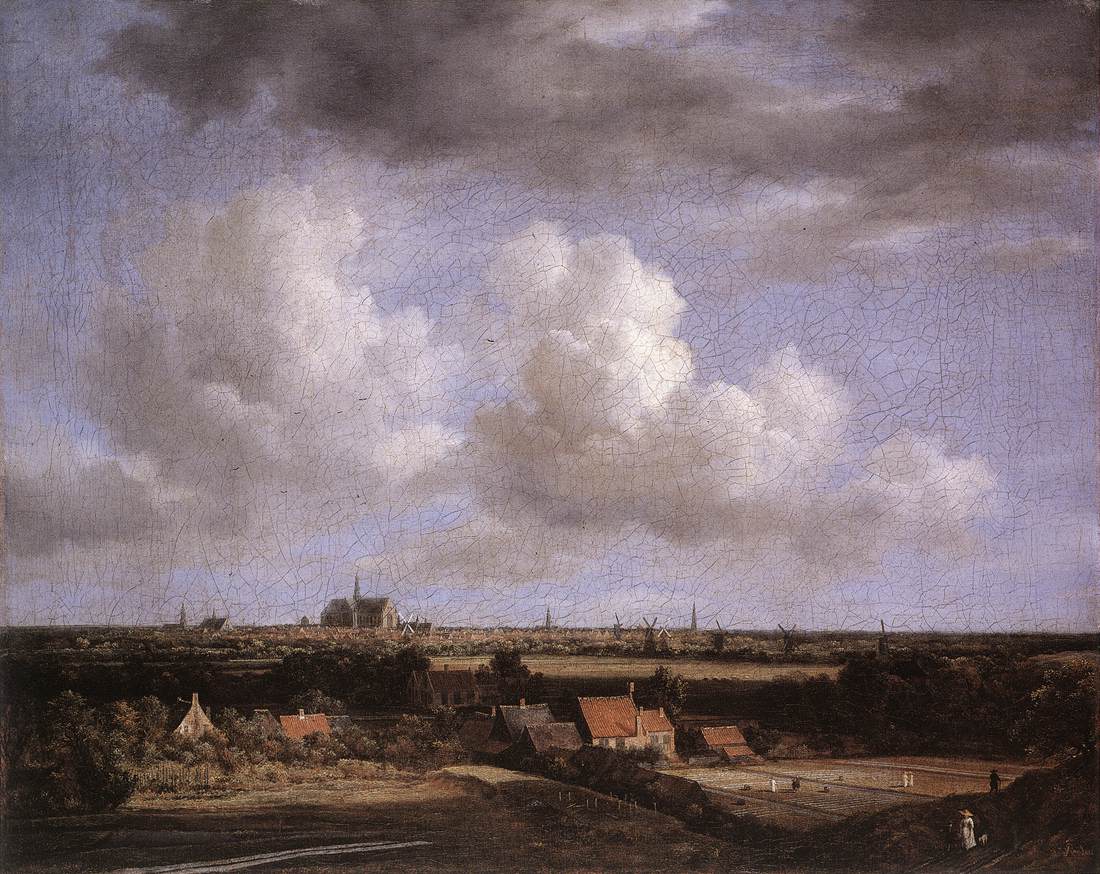 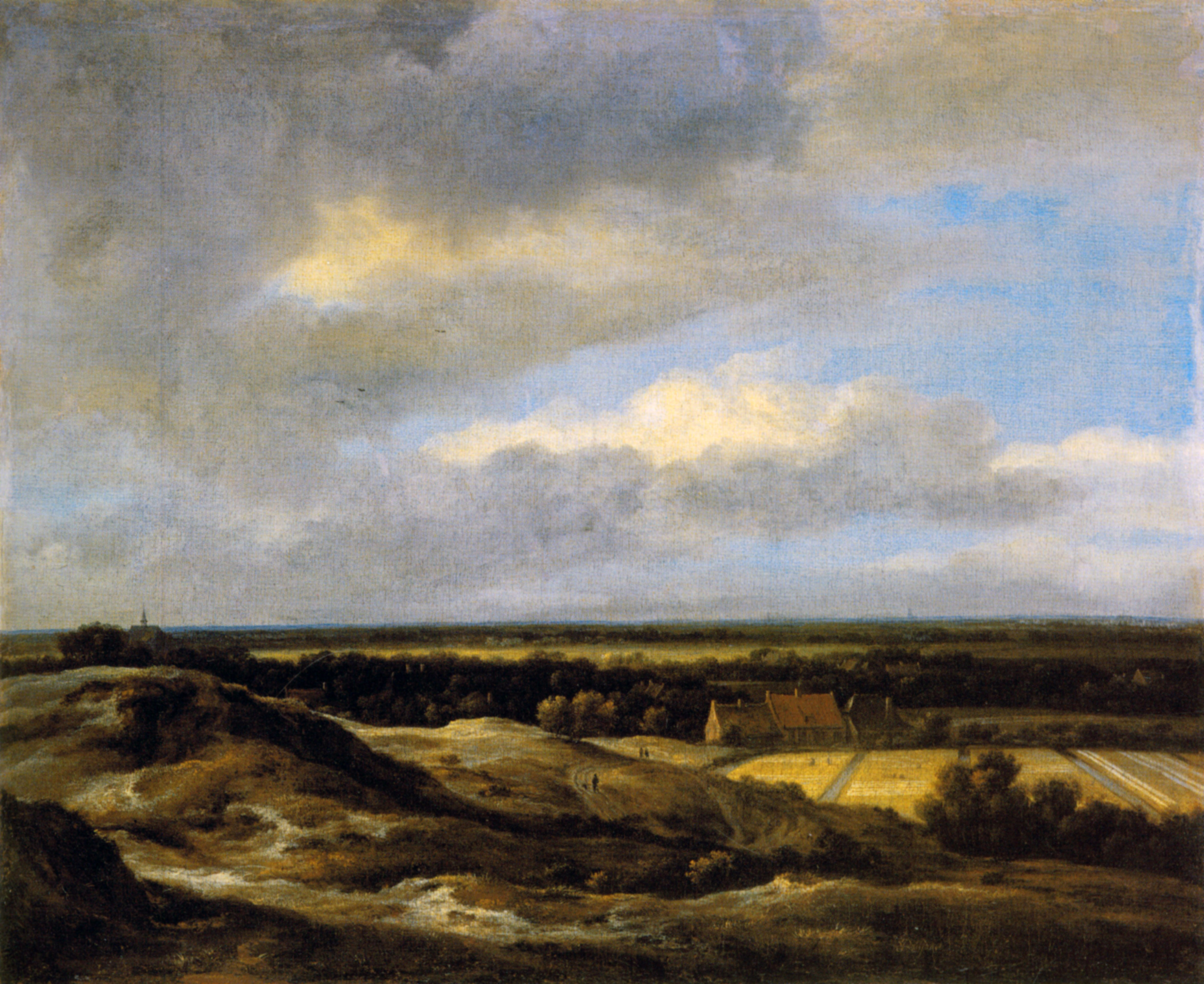 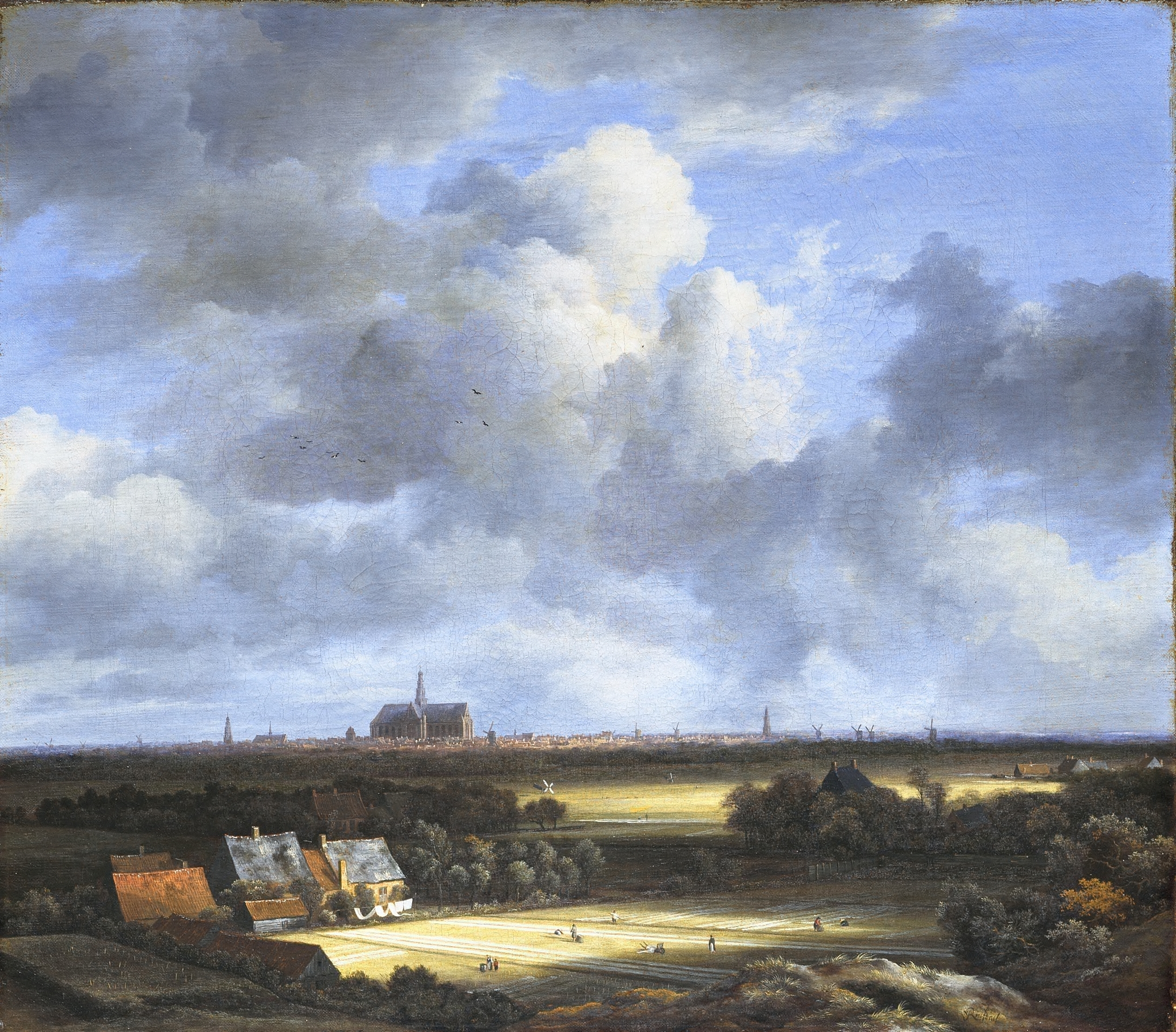 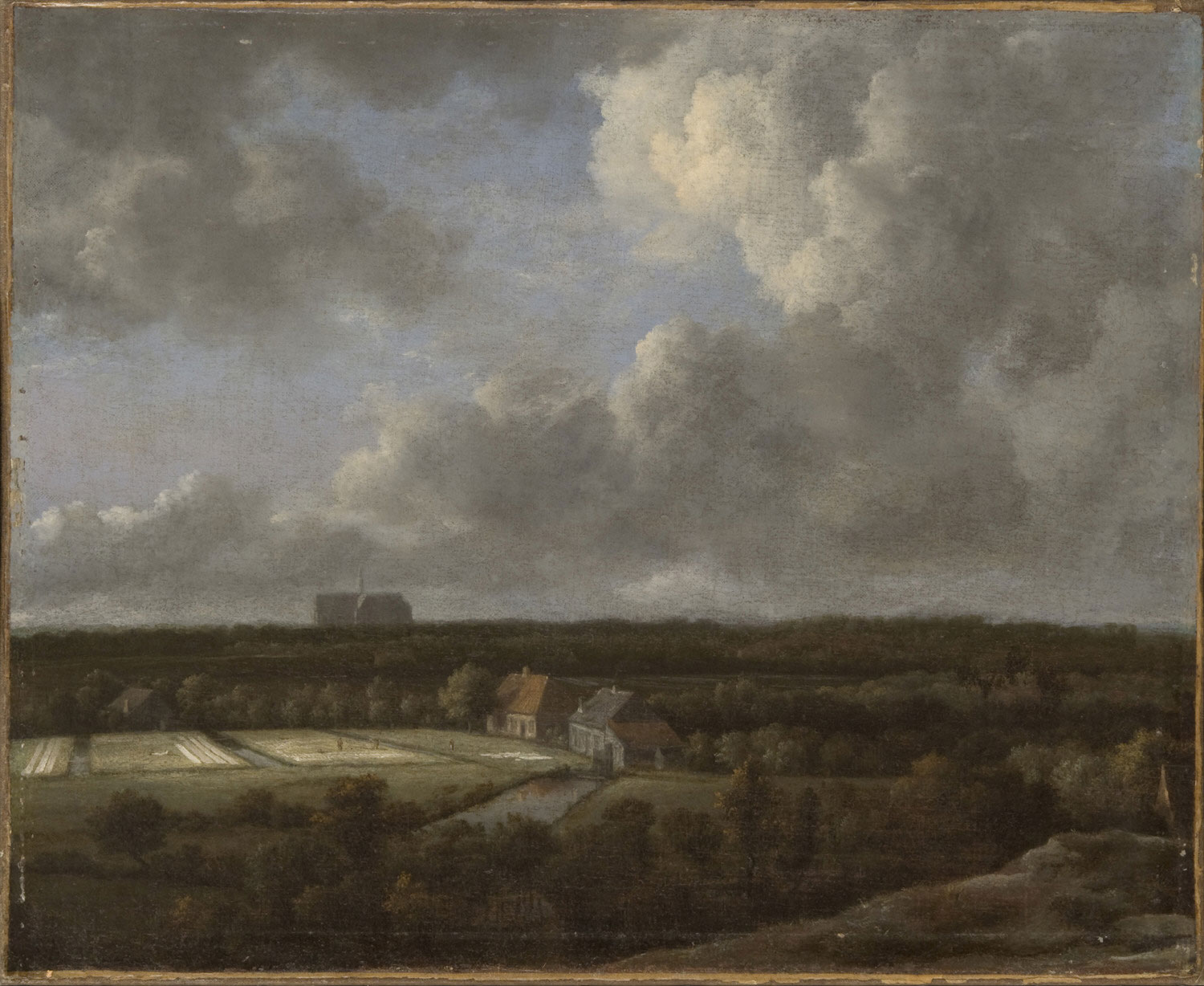 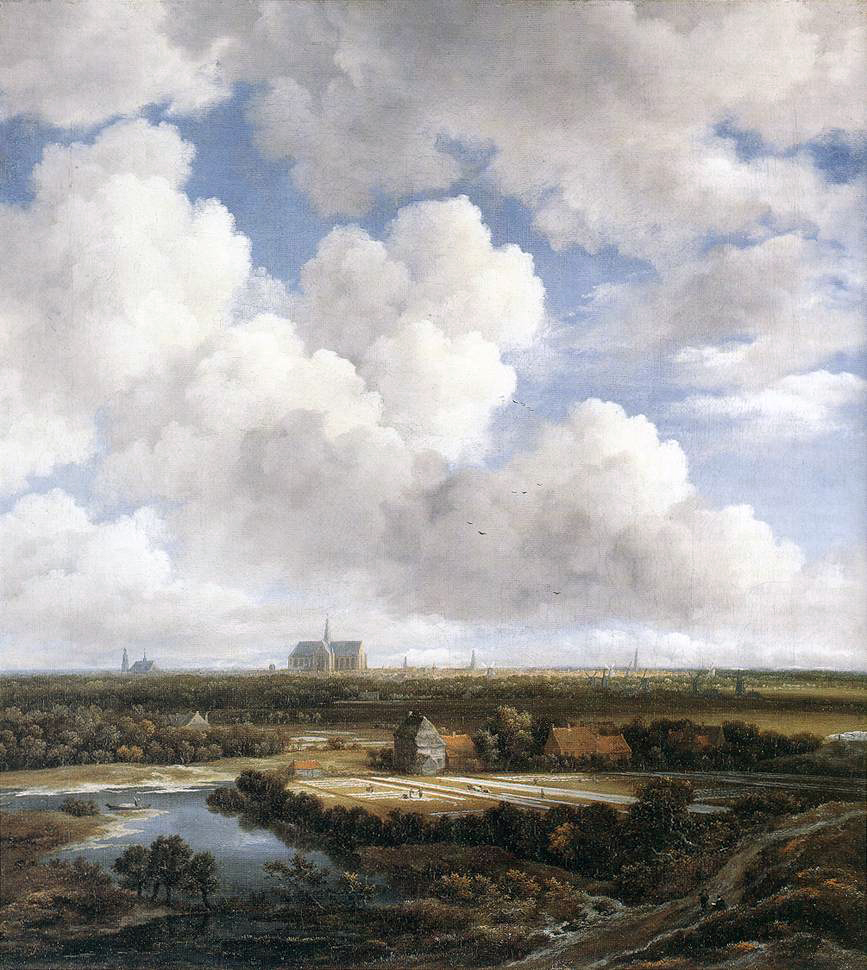 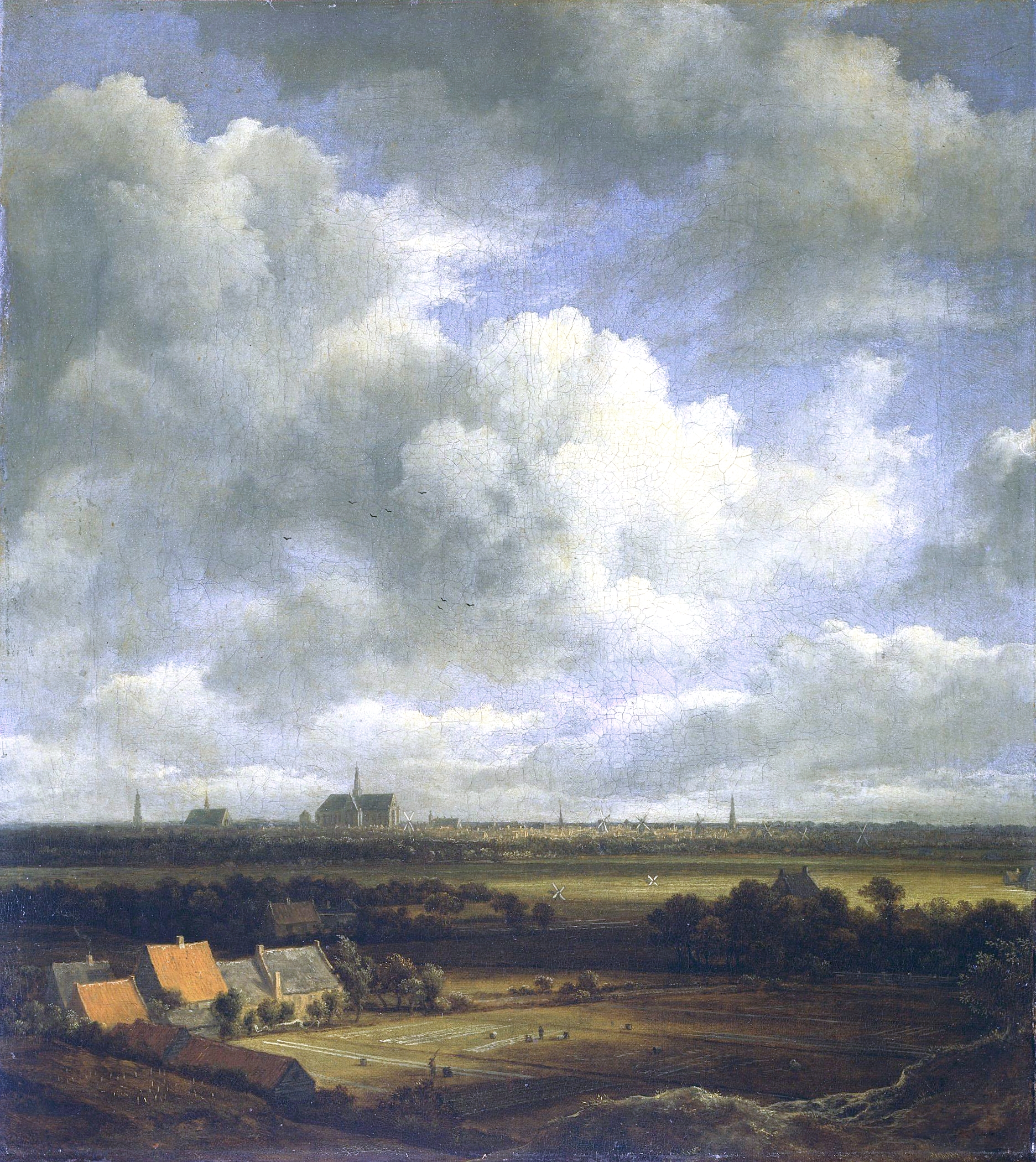 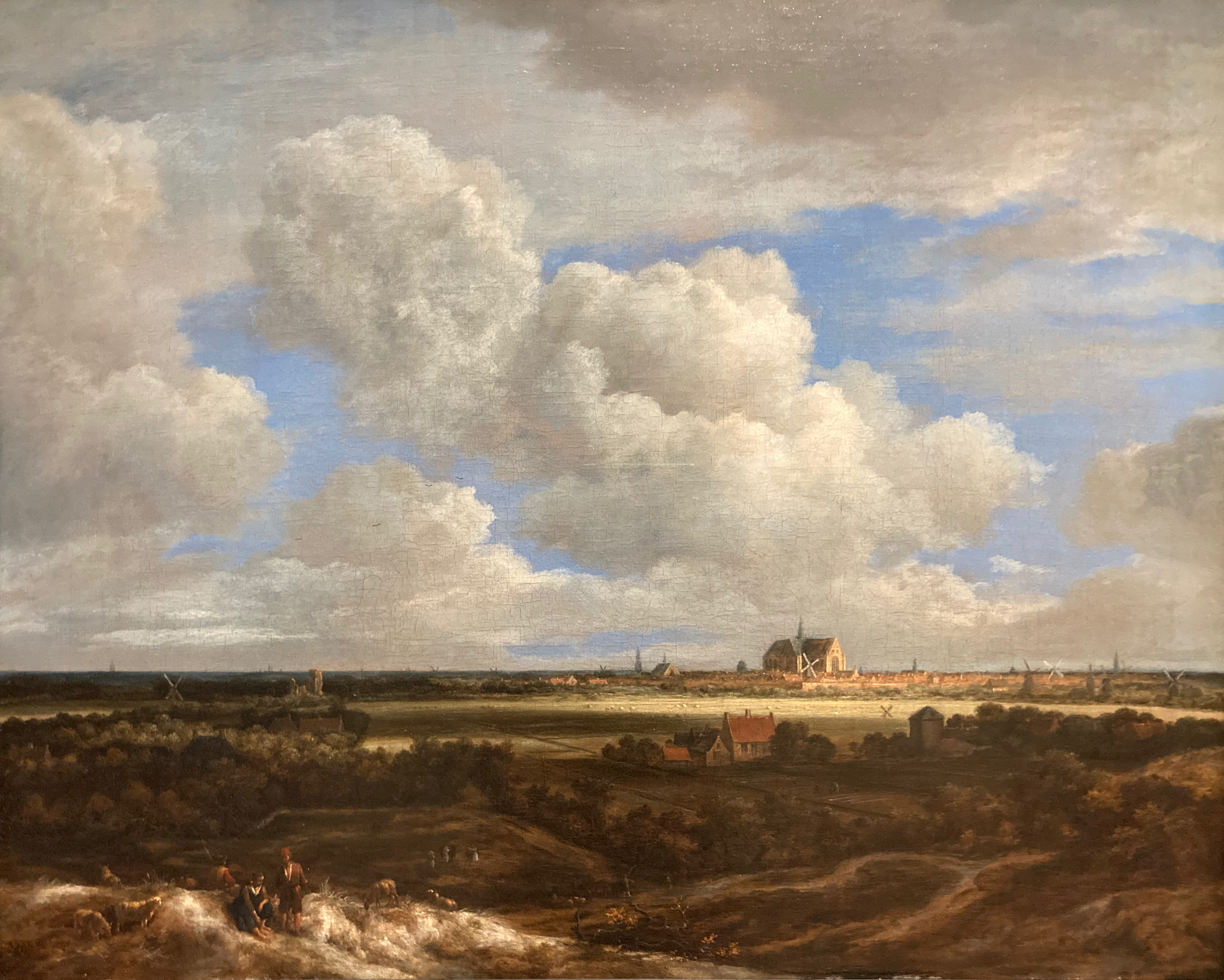 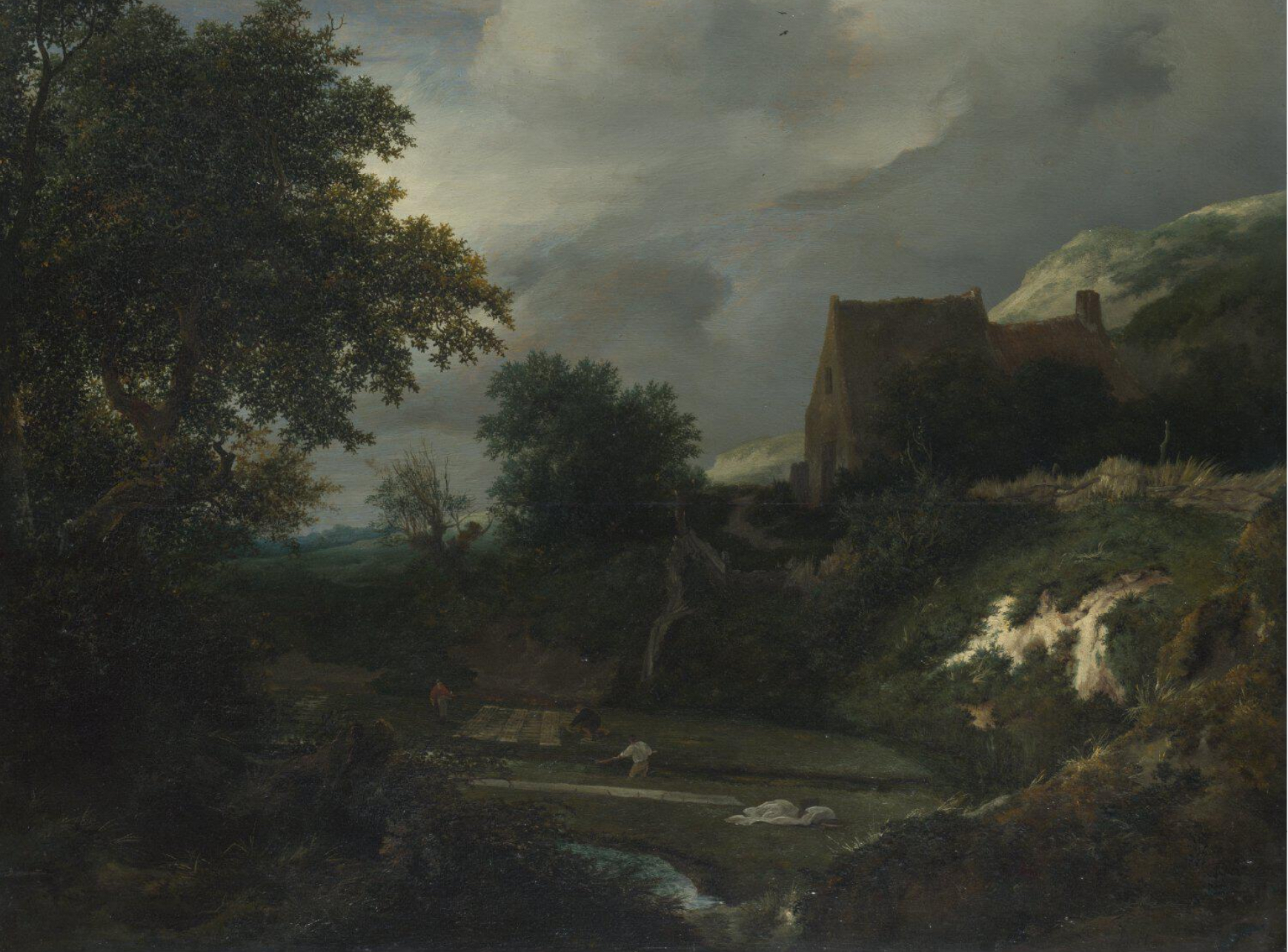 The Dutch artist Jacob van Ruisdael (1629-1682) made at least eighteen paintings of the linen bleaching fields around Haarlem. The landscapes are seen from an elevated vantage point, with the church of Sant Bavo on the horizon, and the bleaching fields in the middle distance, intersected by water channels, with strips of white linen stretched out in the sun. The landscapes are dominated by sky – full of air and light.

The paintings date from the 1660s and are now in private collections and museums across Europe and North America.  Last week I saw one of them – A Panoramic View of Haarlem – in the National Gallery, where it is on show as a new loan. The gallery owns an earlier Ruisdael called A Bleaching Ground in a Hollow by a Cottage from the 1640’s. The composition is more enclosed, the viewpoint lower, the mood darker. The shady hollow is an unlikely location for a process so reliant on sunshine, and the rain clouds in the background seem to cast doubt on its success.

The National Gallery’s picture was painted on oak, the others on linen. Unbleached linen is a pale greenish greyish brown. Before the discovery of chlorine bleach in the late 1700’s, linen bleaching was a laborious and specialized process. During the 16th and 17th centuries grey linen cloth was sent to Haarlem for bleaching from all over northern Europe, including England and Scotland.

In his Experiments on Bleaching, published in 1756, the Scottish physician Francis Home described the various stages of the Dutch bleaching method. The cloth was first steeped to remove the dressing of starch and tallow used in weaving. This was followed by repeated ‘bucking’ and watering, when the cloth was soaked in lye at increasing temperatures, then stretched out on the grass for watering while exposed to sun and air. It was then soured in buttermilk, and the stages repeated until it was sufficiently white. Haarlem benefitted from a reliable source of fresh water filtered through the surrounding dunes, rich in iron and manganese, as well as a plentiful supply of milk from local pastures. The whole process took around seven months between March and November. 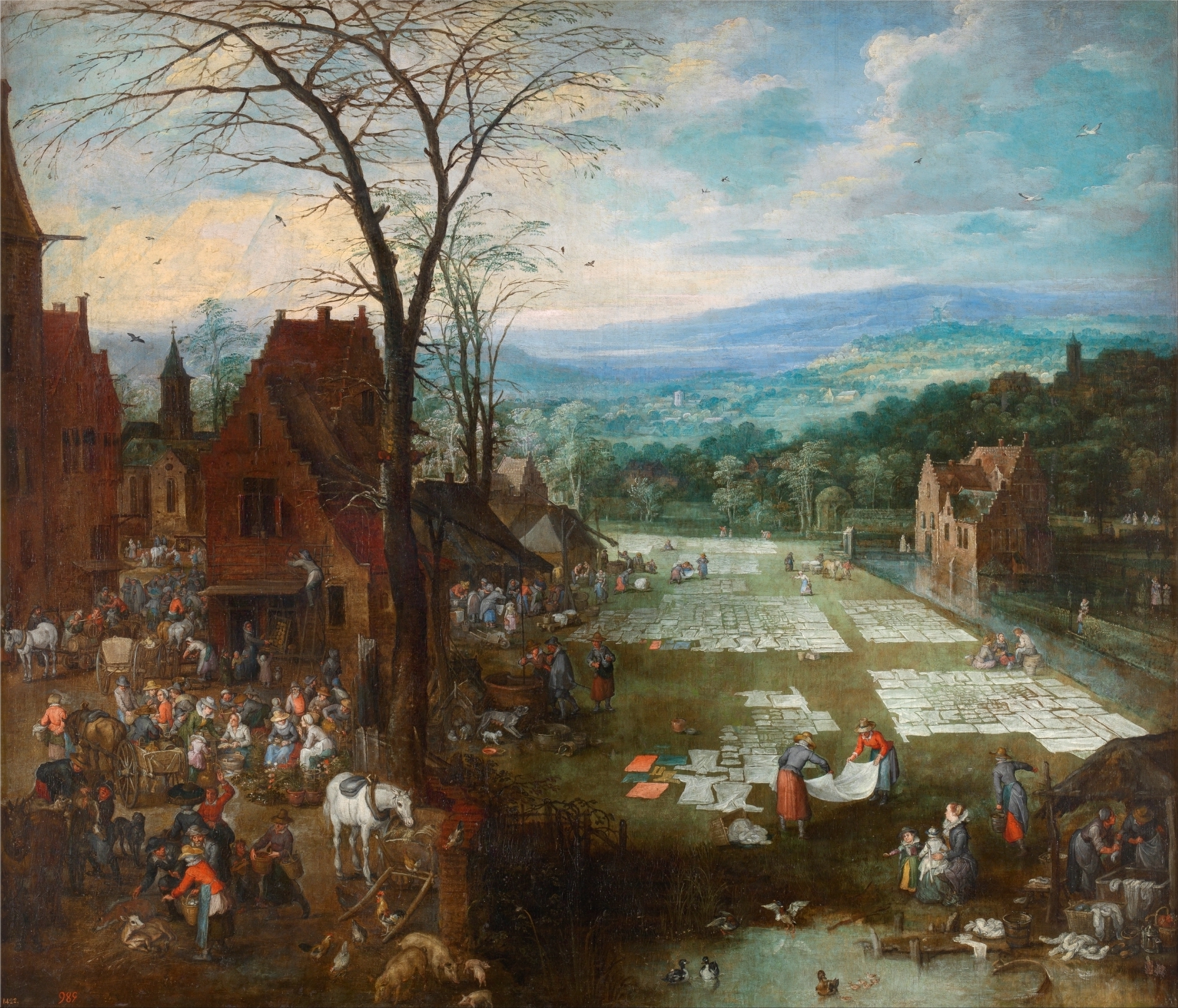 There is a lovely painting in the Prado, a collaboration between Joos de Momper the Younger and Jan Brueghel the Elder, showing linens laid out in the sun near a market in Flanders. These aren’t strips of uncut linen but finished goods freshly laundered– tablecloths nightshirts, underwear.

The accumulation of detail in this painting reminds me of the writing of Adalbert Stifter, who Hannah Arendt described as “the greatest landscape painter in literature”. Isabel Fargo Cole has recently translated a collection of his stories called “Motley Stones”. Stifter’s father was a linen weaver in the Bavarian forest town of Oberplan, and there are several references to weaving and cloth in the collection. The second story, Limestone, is told from the perspective of a cartographer sent to survey a barren rocky landscape where he meets and eventually befriends a local country pastor. The pastor lives in utmost poverty, but under threadbare, faded black clothes he secretly wears exquisitely fine white linen. As a boy he had fallen in love with the girl next door, whose mother ran a laundry business. She had told him:

“My mother says that linens are a home’s highest good next to silver, they are fine white silver themselves, and if they are sullied, they can always be cleansed to fine white silver again. They are our noblest and closest garments.”