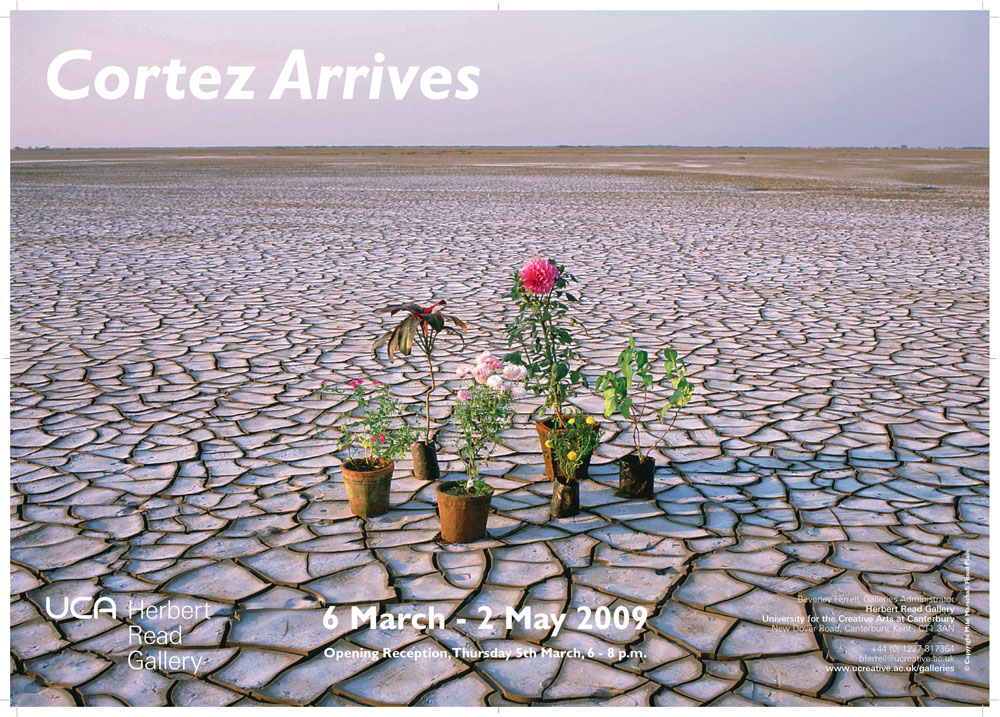 Staring out of a window on the 29th floor I’m watching snow fall upwards. A few blocks away cranes are lifting an airplane out of the Hudson River. Struck by birds, the 500,000 pounds of US Airways flight 1549 fell out of the sky shortly after take off, but everyone was saved and the pilot is a hero. Now, cradled in mid air, the bulk looks strangely animate, giving off the nobility of a stranded whale. Meanwhile the radio is announcing that tomorrow a new era dawns as Barack Obama becomes President of the United States.

It’s not only Cortez who is in strange territory…

There should be four blank pages left after those lines to give them the space that they need. They are one of twenty-six fragments written by the poet and activist George Oppen (1908-1984) that were found scrawled on envelopes and scraps of paper in his study after his death. It is uncertain if it is complete but it doesn’t really matter. They arouse the promise of wonder as they are.

Last Saturday I went to a talk by two neurologists. Towards the end they were asked if there is a difference between the mind and the brain. The answer got complicated, but in short they said that when something is “right”, the body gives off a physical response—goose bumps, palpitations, sweaty palms, dilated pupils—before the mind “knows” as much. The gap between the responses of the body and the mind is a matter of milliseconds. That’s nothing. But then again it’s everything because if knowing can be physically manifested, even just in the form of a momentary disorientation, then it follows that art could be understood as the response to discerning the difference between the mind and the brain in relation to stimuli.

This is different to the ensuing academic debate about the production of art as a form of knowledge, which prioritizes the cognitive value of art. It’s also not about art practice as research that produces knowledge, or artifacts as embodiments of knowledge. While all such incarnations of course exist, and the discussion provides some kind of credible and logical accountability for art practice, it removes space for the type of art that resists meaning as knowledge, or which is produced as a visceral response to “knowing” something.

All the artists in Cortez arrives deal with this conundrum. They eschew the notion that art needs to “represent” or to “signify,” instead producing works that end up being “of themselves.” They share an instinct to synthesize material processes and imaginative expression, developing visual languages that personify the subtleties and contradictions of experience. They accumulate, filter, speculate on, and play with ideas, embracing the absurdities that may spring forth from daily life. Relishing the intrinsic foolishness of experimental creation, they want to find forms that make sense of phenomena. Working across drawing, painting, sculpture, collage, video, sound, and film, what unites the artists’ divergent styles and techniques is the resonance of process. You can sense their engagement with materials is directly related to their obsession with digesting what they encounter, read, watch, hear, and think.

Interaction with their artworks stirs a response akin to the sensation of watching a good dance performance, wherein you become aware of what it feels like to have a body. This way of knowing something isn’t just contained in the head, where trains of thought are sparked and memories evoked, but reverberates through one’s whole being. The kind of recognition that is triggered cannot easily be identified because it is mental and physical at the same time. In a similar way the works in Cortez arrives are less explicitly communicative than experiential, embodying the open-endedness of potential.

Kate Fowle is a curator and writer based in New York.